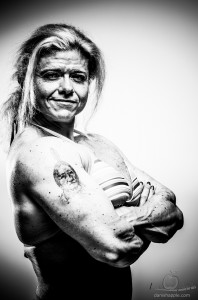 As I mentioned in the previous blog post we had a great time photographing Tamar Makar. We agreed to hook up again when she had blasted herself through some more punishing workouts leading up to competition time later in the year.

Well, after a small setback, ahem, Tamara essentially pushing herself to the brink of collapse (“I need to eat… and then sleep”), we rescheduled our second meeting. We both had goals in mind, one of each was for her own personal record of where she was at compared to a few weeks back, the other for me was to try out a few things against some coloured backgrounds. I’ve done quite a lot against white backgrounds in recent times and wanted to mix it up a little by adding some colour to the background flashes.

So… let’s mix it up with a whole heap of multi-coloured rainbow backgrounds, yellow submarines and stuff going on in the background… what do you say to that, Tamara? 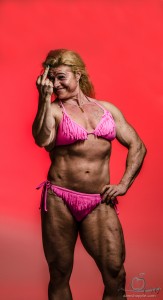 …Ok… perhaps not then. How’s about we just start by focusing on some decently exposed one arm bicep poses? 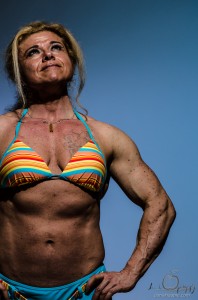 She must get bored of this… I can’t help it, this woman has some AMAZING biceps…

Yes… she really is that fit.

Ok, so how about if we just go with a two colour background, and keep out any yellow submarines? 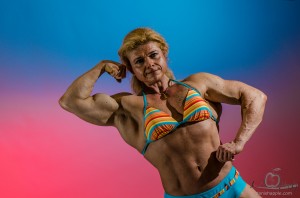 So having got the shots we both wanted, you know… the boring stuff… I decided to take it in a slightly different direction. It might surprise you that I got inspiration from some wedding shots I saw recently and I just ran with this small idea for a concept. 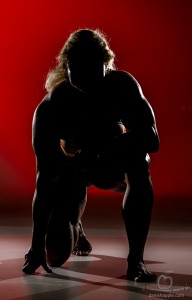 Prepped for the burn! 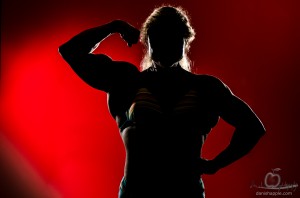 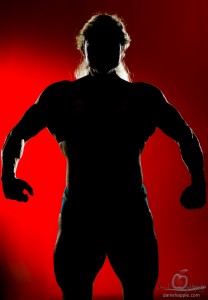 Some of you may have seen the last one over on facebook. This is a fairly simple shot setup, with a couple of flashes on the background with red gel on them, and another couple of flashes firing straight at camera, from behind Tamara.

Finally, I wanted to develop the idea a bit further and instead of just a silhouette, I wanted to capture her immense frame in shadow form. Although I could have very easily just had a red-gelled flash pointing sraight at Tamara, I wanted a little more control over what was going on inside the silhouette, rather than just pure black. As a result, we kept the flashes on the background and Dasha walked some distance away from Tamara, flash in hand, and pointed the beam straight at our wonderful model.

All I had to do was point at the wall and shoot. 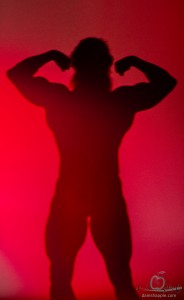 Thanks Tamara, we’re all done, you can relax now… oh wait… just one more… 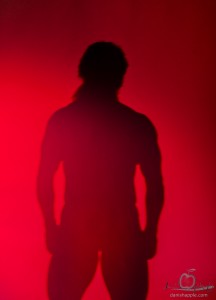 And we’re done – an absolutely phenomenal shoot. I find it very hard to stop shooting when you have someone as amazing and patient as Tamara… it usually takes a certain glance from Dasha before I’m reminded that people have a real life to get back to 🙂

We’ve got more to come with Tamara, including something rather special, in the not too distant future, so watch this space!