Take your own photos…Not ours! 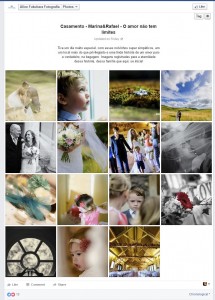 Edit: See below in the comments for the response from the photographer concerned. Regardless of reasons, I have respect for her coming forward and replying with an apology. For this reason, no further comments will be allowed on this blog post and some personal contact details have been removed, though the post will remain for information purposes so people can see how easy it can be not just to copy someone else’s photos, but also just how quickly they can be found out. We were made aware of this breach within 48 hours of it happening – don’t steal photos, kids!

Well, it was only a matter of time I guess… stick enough material out there and eventually someone, somewhere, halfway across the globe and supposedly out of harm’s way, will copy it.

But that’s not even the worst of it. It’s one thing for someone to take your photo and claim it as their own. But when they go to the effort of spending time digitally altering the original image to remove your logo and then adding their own, that’s when you know something has gone wrong for that person… I mean, quite frankly, who wants to spend that time in front of a PC screen editing when they could be out taking new, better, photos? 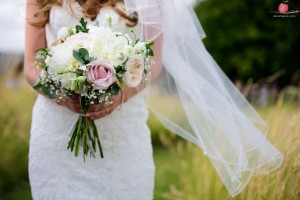 Since Aline refuses to respond to any of my emails, facebook friend requests, flickr mails, instagram messages or whatsapp messages requesting a simple apology and admission of being… well… rather silly… I thought I would just do her the favour and share all her details here [edit: since Aline has now come forward and apologised in the comments, these details have respectfully been removed], so that anyone that wants to book an absolutely amazing digital artist can do so. 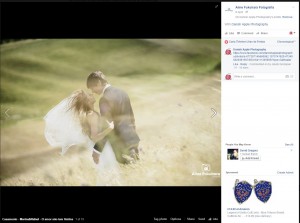 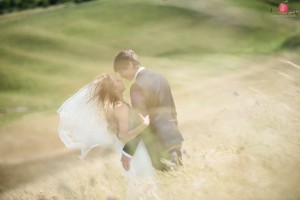 After all, it won’t matter if she doesn’t take good photos at your wedding, she can simply open up her photo editing software of choice and copy/paste your heads onto the bodies of a younger, more attractive, and probably richer couple than you.

Not only that, but while she’s at it, Aline will go that one extra step above and beyond for you.

Take for example, her treatment of half a dozen of our couples, all of whom were included in the Facebook photo album at the top of this blogpost. Chantelle and Martin, Charlotte and Richard, Lorna and Gary, Justyne and Harry, Tessa and Paul. From now on, they will simply all be known as Marina and Rafael. After all, it’s much easier to remember just one set of names, much quicker to put together the slideshow if we just mash up all their photos into one big slideshow, and plus, if they don’t like their photos, it doesn’t really matter because a) no one searching for your real wedding photos will ever find them online because they are searching for the wrong name and b) Aline can take the very best bits from someone elses’ photos and make it look like you were there! and c) you now live in Brazil… Awesome! Congrats guys on your honeymoon in Sao Paulo. 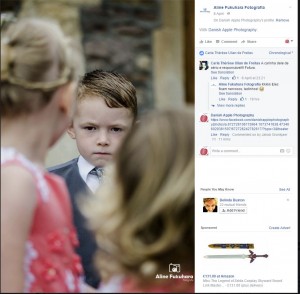 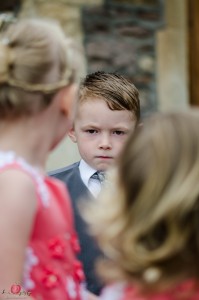 I’m pleased to say that, after reporting this to Facebook, who responded within 24hours, the infringing material had been removed (I think I owe a lot to all the people that commented on Aline’s business page and on the individual photos – thank you!) Facebook tells me this was removed before they were even able to look at it, so at least Aline did the right thing and removed the photos. But, I ask, is that actually enough? Should it be as simple as that? Someone based some 5,700 miles away copies our photos and then when she gets discovered she simply hides away in a darkened room for a little while?

I don’t think so. Which is why, I have quite simply asked for a public apology. I’ve not asked for money, despite this being a very straightforward case of breach of copyright. What’s the point? After all, Aline the photo thief is based so many thousand miles away that it would cost me everything I can claim for just to send her a letter! So I’ve made it easy for her, I’ve asked her, to apologise, in public, admit she made an error, and then we can be done with it.

At least, I hope she might learn from it, hopefully others might learn from it, and I would be more than willing to help her advance her own photography skills. That’s right, I’m willing to help her improve. It’s part of why I became a Brand Ambassador for Interfit – I love sharing knowledge and I enjoy helping others get better. Just like I still look up to those that are willing to share their own knowledge to help me improve. We’ve all made mistakes and I’m willing to bet that Aline regrets her decision now, with the benefit of hindsight.

So Aline, if you are reading this, what I want is quite simple;

1 – Unblock me and anyone else that rightly commented on your photos to say they were not yours.

2 – Bring your Facebook page back – after all, it’s your income and your business after all. Surely, you still want all those likes, over 400 of them! That’s more than Danish Apple Photography has got, so well done! I imagine you have worked hard until now to get to that stage.

3 – Let’s just make sure you don’t have ours, or anyone else’s copied photos on there when you do bring your page back up? Because there were others, weren’t there? 😉

4 – Apologise. On your page. Admit you made a mistake. Hey, I’ll even accept that you simply say, “Sorry, I was stupid for copying photos.” Or give us a long story about how your family needed the money. I don’t mind. Really. When you’re done, send me a link.

And here’s what I’m willing to do in exchange Aline, if you do those simple 4 steps above:

I’ll copy the link to your apology and place it on here on our blog. And on our page. And my personal profile. That should help both of us. You’ll be getting FREE links to your page! I’ve had a few people helping me to find out who you are. That’s right – you think I was alone in finding out all your details? I have your full name, your address, where you studied, and several social media network links. Google is really good, but it’s even better when you have a little help from other friends. I really don’t want to have to use this information but I would also REALLY like an apology.

What else? How about this? You can email me directly, and ask me for advice, personally call me (hey, you’ve got my whatsapp), and ask any question you want about photography. I won’t tell anyone else you have asked for advice, and I won’t take credit for any photos that you create using that advice. But hopefully, you’ll get better and eventually you’ll feel confident enough that you don’t need to copy others… instead, others will want to copy you! And then, when that happens, offer them the same get-out; “apologise and ask me for advice instead of copying my photos”

Hello , my name is Aline Fukuhara .

I’d like a minute to introduce myself and apologize for everything that happened in last days, even without any direct relation with the fact .
I am a Brazilian photographer, with different interests and love for the art of photography.

On Monday , I was surprised by an unfortunate information that someone had used my name and my Facebook page to publish photos from another photographer. In this case of the Danish Apple Photography.

First , I want to make clear my respect for any similar professional , after all we love what we do and we have so much work to do a producion. It would be impossible to do all this alone , without a great team behind , helping us .

A few days ago, a person without any relationship with me , from a marketing company, took over the fact of working in a company of
personal relationship and have access to the mine, as well as other profiles and accounts, which they manage.

This person, without any scruple, did something unthinkable without having any idea of ​​what entails in my professional life and how I care of my work. So little thought about how it would affect the owners of the those images.

Second, I have to say that Jakob and his team are admirable artists and I personally never take over pictures of him. I have a very different work of Jakob’s company. Very humble, here in Brazil.

But I know as well how is the fine line that we live daily and how difficult it is , take care that our work dissemination does not become an image unowned, used for other purposes without our knowledge or credit.

Finally , I’m so sorry for any problem this may have caused to all involved, really.
I am available and in contact Jakob to assure this to be just another lesson for future actions against all this. My best regards to all.

Thank you Aline for getting in touch and appreciate your comments – Regardless of why this has happened, not many would own up to having made a mistake or indeed apologise to those affected. As a mark of respect for Aline coming forward, I have made a number of amendments and no further comments will be allowed on this blog post. I would also thank those helped us establish contact with Aline and in particular those that made us aware of the original copyright theft.