I am The Photography Show 2014

Last weekend saw the inaugural Photography Show held at the NEC in Birmingham. The show serves as a direct replacement of the long-running Focus On Imaging, which had been running for 24 years and was rather surprisingly cancelled after last year’s show. It offers a mixture of workshops, seminars, displays from all manner of photography-related suppliers and even retailers which can have some great deals on new (and used) gear.

For as long as I can remember, I have attended the show, even purchasing my first DSLR some years back, so I was really hoping for great things for the Second Coming. So without further ado, here’s a quick report from the show. For those that haven’t been, if you have an interest in photography, the show makes for a great day out, whether as an amateur or professional.

The show takes place over a weekend and a couple of weekdays. If you want to avoid the real swathe of people, a weekday would be the best time to go, indeed the best deals are usually on the last day of the show, when those exhibiting are loathe to have to pack up the heavy stuff and so would rather sell it off at a discount. That said, my eagerness meant we attended the show on day 1, this year Saturday 1 March. Beating the queues and general chaos on day one means getting there well before 10am (as well as sorting tickets out beforehand, of course). You’ll still end up waiting to get in, but at least you’ll be ahead of this lot:

Once you get in, it becomes a game of chess, always thinking several moves ahead… Do you go and visit the stands you are most interested in first, foregoing the weirdness you see along the way?; 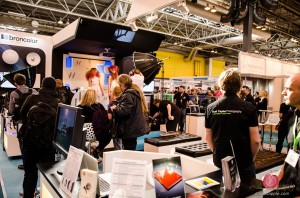 Or perhaps you go and get the deep-down emotional cravings out of your system; 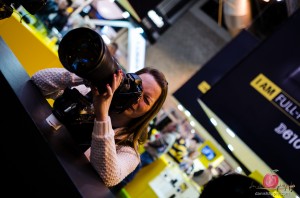 Or maybe you wander around aimlessly, just casually coming across the small gems hidden in amongst the throng;

This little fella was actually on display at the Manfrotto stand, and with a slight adjustment of my shooting angle you can see the recognisable white-on-red logo in the background; 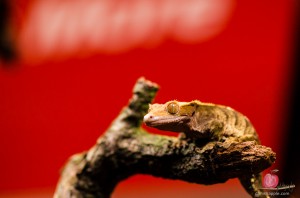 Gecko in the red

Of course, there’s plenty of gadgets on display… but that’s not usually what catches my attention. 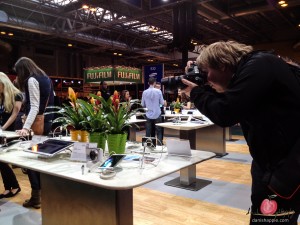 Most men would be playing with the gadgets… 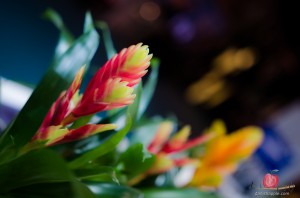 But not Jakob… who appears to prefer flowers…

Then you have the glimpses of genius at work at the many practical workshops and talks. Nikon had a major scoop of Joe McNally at the show, going through in a short 45minutes just how you go from horrible lighting, to “not bad” to something really quite cool: 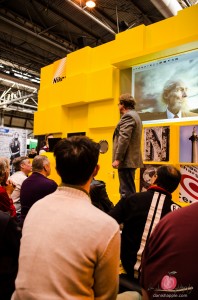 His talk also produced one of the most memorable moments of the show, when one of his subjects, dragged from the audience, was a young guy wearing a bright yellow top. Joe wanted to shoot him up against the background scenery and says “You had to wear yellow…If only you had worn blue…” to which, without prompt or questioning, the young lad takes off his yellow sweatshirt to reveal a blue chequered shirt underneath. This prompted a fair deal of laughter and applause from the audience, but Joe was quick and responded, after a short chuckle, “if only you hadn’t worn chequers…”

If ever you get the chance to go and see Joe at work, be it for a day (such as the Gulf Photo Plus seminars) or just for 45 minutes at a show like this one, anyone with aspirations involving people photography can learn a lot from him. Joe is not just great on lighting but on how to relax your subjects and get the best out of them. They say that imitation is the best form of flattery, I say it’s an incredible way to learn, and Joe is one of those amazing people that is willing to share his entire workflow for you to copy and take with you to form your own path.

Another element of our trip to the show was to take a visit to the Graphistudio stand. We’re very proud of our association with Graphistudio and use their books for all of our wedding photography clients. Having recently taken supply of our first sample of the Digital Matted Album which was launched last year, we are looking forward to their new stuff and it was great to catch up again with Andrew Younger, another photographer who Graphistudio invited along to speak on their behalf. 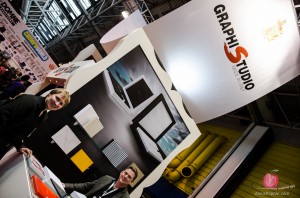 Andrew Younger at the Graphistudio stand

On top of all the usual, the organisers of the show added some new things this year. There was a catwalk, a garden, a superstage with talks from well-reknowned photographers and even a live stage with displays ranging from bmx riders to martial arts;

The rich and famous couldn’t stay away either; 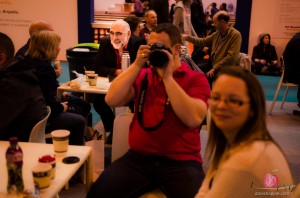 Tell me Miss Moneypenny, is there a Vodka Martini in this thermos?

Then there was the downright bizarre. 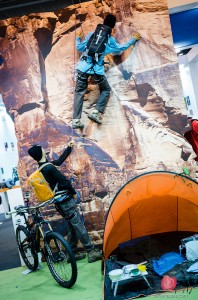 What mannequins get up to in their spare time

and finally, Dasha appears to have bought into the ethos of ‘bigger is better’ when it comes to lighting modifiers… 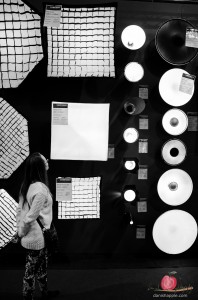 So many to choose from…

All in all a great day. For those of you that couldn’t make it, there’s always Photokina, an even bigger event held bi-annually and coming later this year in Cologne in Germany. I hope the Photography Show guys keep up the great work and I look forward to 2015!